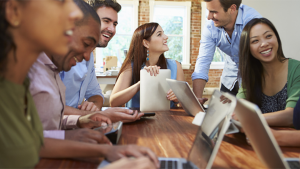 Technology is a huge part of our lives. From laptop workers to quick Amazon purchases. Whether you're buying groceries or bathroom stalls. With that, mobile devices are exploding with internet access. The easy access and social media have become heavily influential even in the political realm, as seen in recent elections.

Each year, technological advances speed along, shaping and reshaping the functions of our daily lives. This is especially for the workplace. Making collaboration fun and effective, Slack software has risen as a leading collaborative tech trend of the year.

According to Fortune, this San Francisco startup grew their user pool from 1.25 million to 4 million users in the span of one year. Roughly 30% of those customers are paying $6.67 or $12.50 monthly fees, bringing in an annual revenue estimate of $140 million.

Described as “an instant messaging and collaboration system on steroids,” researchers expect Slack usage to skyrocket throughout 2017.

THE MILLENNIAL SHIFT TOWARDS FLEXIBLE PRODUCTIVITY

As baby boomers begin to retire, millennials will steadily climb the corporate ladder and become tomorrow’s CEOs and presidents. As this ultra tech-savvy generation grows, company systems will need to grow and shift along with it to maintain relevance.

Anyone born between the early 80s and early 2000s experienced a childhood filled with AIM and texting. Google, iPhone apps, and YouTube videos have been a game changer, allowing insane amounts of data access at the touch of a finger.

Remote access and collaboration are two huge ways millennial employees will begin to change the name of the game. With constant computer access in their pockets, this generation has become less and less dependent on the typical office work environment. Through the numerous instant messaging and file sharing programs, it’s easy to quickly and securely share information.

Accounting for the developing technologies and mindsets, Slack Software brings the pieces and people together in flexible productivity. Users can “stay in sync wherever you go” with Slack’s apps for iPhone, Android and Windows.

In retaliation of the fast-rising contender, Microsoft recently announced a new product called Microsoft Teams. They will incorporate it into the online Office 365 “productivity” subscription which is used by 85 million “knowledge workers” globally.

What’s funny about Microsoft Teams is how closely it resembles Slack software functioning. Microsoft Teams provides a communication medium for groups of people, which allows multiple simultaneous conversations to occur.

Sometimes Microsoft users will ignore these new features, opting for the familiar Office products: email, Word, Excel and PowerPoint. Slack’s focus on the niche market may help in the competition. Either way with Microsoft’s 85 million users, the rivalry resembles a David and Goliath story.

Two months ago Slack made a statement with their full-page ad in the New York Times, which doubled as a snarky public letter to Microsoft. Aside from welcoming Microsoft to “the revolution,” the stunt was primarily a PR move to gain attention. And it worked.

Slack’s full-page letter successfully brought the tech battle into the eye of public consciousness. With close attention to the user experience, Slack plans to retain their customers.

Outside of the highly-publicized competition for users, the technology advances are wonderful. The rivalry pushes each company to up their game, leading to great benefits for all customers.