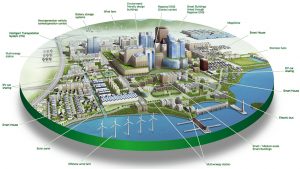 Smart phones are everywhere. We each carry a tiny computer in our pockets. What was once thought of as an ultra-futuristic idea has become a reality. Smart phones also represent a nearly $3 billion market.

Smart phones are just one example of the Internet of Things is permeating our lives. From home heating systems and Fitbits to self-driven cars and drones, the robot and human world are slowly coming together.

The internet of things is a broad scale description of how smart technologies will begin to communicate with each other for an increasingly robot-run world.

Right now there are several multi-million dollar investments into research to ensure this integration. With so much excitement in tech growth, experts predict as many as 100 billion devices will be connected by 2020.

While visions of a hovering Jetson-like world is still a bit far off, some IoT developments can seriously reshape our mobility. Cities will become smarter as IoT integrates into grid modernization.

When it comes to urban mobility, there are quite a few issues. From air pollution to mind-numbing traffic congestion, our car-centric cities have become problematic.

The IoT comes into play for transportation in a term known as “grid modernization.”

THE INTERNET OF THINGS AT WORK

The increasingly popular topic has numerous personal and professional implications. It will slowly but surely redefine the way we live and work.

So many smart devices are already utilized routinely. Think washing machines, headphones, lamps, coffee machines and of course cell phones. More and more these devices will be able to connect to each other.

With increasing development speed, tech prices are going down and devices are widely distributed. Children are wearing Fitbits which can monitor their sleep cycles and exercise levels.

The more devices created with Wi-Fi abilities, the more connected everything and everyone will be. Think of morphing relationships between people and things.

While it’s easy to see the impact on a personal, day-to-day basis, the bigger picture implications for cities and the natural environment are huge. Think about the high-pollution in city smog and the over-congested roadways at morning traffic.

There’s a reason so much money is being poured into the development. Eventsource energy recently created a $400 million budget for a grid modernization plan in Massachusetts. Over in Washington, D.C., utility regulators have announced their pursuit of a modernized electric grid with a $25 million price tag.

THE DEVELOPMENT OF GRID MODERNIZATION

With virtually endless possibilities for connections, the IoT can take on the challenges of transportation. Several cities are catching on along with the clean energy companies and pouring money into grid modernization.

Just last the month the Department of Energy published their Quadrennial Energy Review with a U.S. energy policy through the year 2040. As the American economy becomes increasingly digital, the DOE stressed the importance of electric grid modernization. The DOE believes the Grid Modernization Initiative is vital to increased national security, economy and life quality.

Imagine knowing exactly how long it will take to get to work. Imagine your car knows how many cars are at the next traffic light and will be able to account for the additional oncoming flood of cars. When cars and grids can communicate with each other, the entire process will be streamlined. At this point, the interconnected devices will make your route to work infinitely more efficient.

Right now there’s a lot of trial and error research implementation. There are still numerous technologies that will need to be in place before the intelligent grid can begin freeing up irritating bottlenecks and utility issues. But the landscape of humanity is rapidly changing.